Skip to content
HomeAncient Demonology: The Temptations of St. Antony 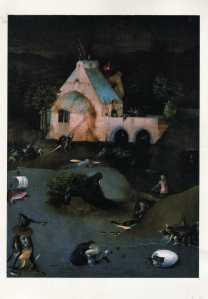 My first introduction to ancient demonology was the painting to the left, The Temptations of St. Antony, presumed to be by the Dutch painter Hieronymus (Jerome) Bosch (1450-1516).  As you can see, all sorts of the denizens of Hades are surrounding St. Antony, the hunched hermit by the shrub in the middle.  There is a naked woman in a pond, a variety of bizarre monstrosities on the roof of his abode as well as those scaling its walls with ladders.  The bottom left contains an example of the mediaeval imagination it is hard to explain, whereas in the right, above the egg, is a demon clearly designed to frighten.

However, front and centre, is Funnel Butt.  A person with his tunic pulled up over his head, his left foot in a jar, and a funnel coming out of his butt.  Flying from this funnel are birds.  And to the right we see a guy shooting arrows into the funnel from his perch in an egg.  Here’s a closer view of Funnel Butt:

This demonological wonder can be seen in the National Gallery of Canada in Ottawa, where Emily first showed me it.  The picture here is scanned from my postcard of the same.

In this late mediaeval painting, we have an example of the primary role demons play in human life: Temptation.

Wait.  Temptation?  What exactly is Funnel Butt tempting St. Antony to do?  What are any of these things tempting him to do?  I mean, the naked woman in the pond seems fairly obvious, but all these others?  What is going on?

Bosch’s painting is inspired by the Life of St. Antony by St. Athanasius, one of the most popular books of the Middle Ages.  In this book, we read:

… there was a sudden noise which caused the place the shake violently: holes appeared in the walls and a horde of different kinds of demons poured out.  They took on the shapes of wild animals and snakes and instantly filled the whole place with spectres in the form of lions, bulls, wolves, vipers, serpents, scorpions and even leopards and bears, too.  They all made noises according to their individual nature:  the lion roared, eager for the kill; the bull bellowed and made menacing movements with his horns; the serpent hissed; the wolves leaped forward to attack; the spotted leopard demonstrated all the different wiles of the one who controlled him.  The face of each of them bore a savage expression and the sound of their fierce voices was terrifying.  Antony, beaten and mauled, experienced even more atrocious pains in his body but he remained unafraid, his mind alert.  And though the wounds of his flesh made him groan, he maintained the same attitude and spoke as if mocking his enemies.  ‘If you had any power, one of you would be enough for the fight; but since the Lord has robbed you of your strength, you are broken and so you attempt to use large numbers to terrify me, although the fact that you have taken on the shapes of unreasoning beasts is itself proof of your weakness.’  And he went on confidently, ‘If you have any influence, if the Lord has granted you power of me, look, here I am: devour me.  But if you cannot, why do you expend so much useless effort?  For the sign of the cross and faith in the Lord is for us a wall that no assault of yours can break down.’  They made numerous threats against the holy Antony but gnashed their teeth because none of their attempts were successful — on the contrary they made fools of themselves rather than of him. (Ch. 9, Carolinne White, trans. in Early Christian Lives, pub. by Penguin; another translation is online here.)

Demonology comes up throughout the Life of St. Antony; it is one of the foundational texts for much Christian demonological thought.  The demons are here attempting to draw St. Antony out of his cell, to drive him back into society, to stop him from praying.  David Brakke (Demons and the Making of the Monk) has said that it is more appropriately considered the trials of St. Antony than the temptations (both are the same in Latin).

But prayer is one of the weapons we have in the fight.  So they will do their best to distract us, to tempt us to do anything else, to draw us into other things, even things that seem noble.  Many of the stories about the Desert Fathers tell of men who were drawn away from prayer and into excessive works of charity to the peril of their souls.  We need prayer to satisfy our souls, keep connected with God, and wage war on the front lines of the battle.  Let us remember the power of Christ within us, the power of His cross, to keep us safe and enable us to fight the fight and pray the prayers.

3 thoughts on “Ancient Demonology: The Temptations of St. Antony”