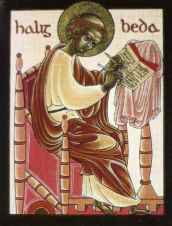 You may have noticed that when St. Bede the Venerable was Saint of the Week on Wednesay that I mentioned his commentaries on Scripture being used in IVP’s Ancient Christian Commentary on Scripture. This may seem more than a little odd, given that the Venerable Bede is, well, mediaeval.

Indeed, Bede is thoroughly and indisputably mediaeval. He was born in the 600’s and died in 735. The fiction of a Roman Empire existed in the West as Italy was nominally under the Emperor in Constantinople, but in reality the Roman Empire in the West was long gone, with no Emperor in Italy since 476. Justinian, the great codifier of Roman law and sponsor of the last flourishing of Classical art as well as the first flourishing of Byzantine art had died in 566. Barbarians had divided the West into a variety of kingdoms — Frankish, Anglo-Saxon, Visigothic, and so forth.

Bede is not ancient.

So why include him in the Ancient Christian Commentary on Scripture?

Those, such as Thomas C. Oden, who are calling for mainline and evangelical Christians alike to rediscover the Church Fathers and “paleo-orthodoxy” usually call us to the first five centuries of consensual Christian thought. Yet even Oden, general editor of IVP’s ACCS, knows that that isn’t really enough.

AD 500 is an acceptable cut-off point for the Classical world, although I’m willing to stretch it to Justinian’s death because of how monumental his reign was and how decidedly different the map of the world was — legally, artistically, politically — be the end of his reign. Yet if we cut of the age of the Church Fathers at 500, we’re missing Second Constantinople and its very important recasting of Chalcedonian doctrine into terms a Monophysite could hopefully reconcile with.

In the West, we miss St. Benedict of Nursia and St. Gregory the Great in the 500’s — one vital for the development of monasticism and spirituality in the West, the other for biblical interpretation, conversion of the Germanic peoples, and pastoral concern — as well, of course, as Boethius and Cassiodorus, also very important and very popular Christian writers of the 500’s. We have to leave out Isidore of Seville from the 600’s — important for pretty much every idea under the sun (and beyond) throughout the Middle Ages.

Perhaps a temporal designation for “Church Father” does not quite work. The Eastern Orthodox do not do this, but instead consider the Fathers as a conceptual designation, thus including St. Simeon the New Theologian (1100’s) and St. Gregory Palamas (1300’s) as Church Fathers although they stand outside the Age of the Fathers.

Nonetheless, the idea of a Church Father tends towards the early, not the late, towards the ancient, not the mediaeval.

The Church Fathers are those who men* who have left behind a written legacy that is orthodox, who had a certain holiness of life, and who were part of the formation of Christian orthodoxy. So men like the Cappadocians or St. Augustine of Hippo who have laid foundations of theology that are so important that even today’s heterodox read them to gain insight, or those like St. Benedict and the Desert Fathers and Mothers who laid the foundations for monasticism and spirituality that are so important that our vision of monasticism would have been wildly different without them are easy choices for Church Fathers.

However, there is no ancient consensus, just as there was no mediaeval consensus, no Reformation consensus, and there is no contemporary consensus. What the early mediaeval and Byzantine theologians and spiritual writers provide us is a consolidation and synthesis of the patristic legacy.

Thus we get settlements over the date of Easter, the spread of Benedictine monasticism and Augustinianism in the West as well as a certain level of liturgical systemisation. By 735, the western church was inescapably mediaeval, but without the early mediaeval synthesists, the shape of the mediaeval church and beyond would have been very different.

In the East we have a similar story with Christology, icons, hesychastic monasticism and so forth in the early Byzantine world. By 749, with the death of John of Damascus, we have a thoroughly Byzantine church in the East.

So, no, Bede isn’t ancient. But I believe that Bede is a Church Father and well worth reading, especially since he is the only Englishman whom the Church of Rome recognises as a Doctor of the Church!

*The “Church Mothers”, sadly, do not exist because most women in antiquity and the Early Middle Ages did not write. Our ancient Christian female writers are Perpetua (possibly), a few of the Desert Mothers (who are not so much writers as part of an oral tradition), and Egeria who left us a travelogue of her trip to the Holy Land in the fourth century. Sadly, the other holy women of this period did not leave us a written record, despite the high level of literacy amongst many of them.

One thought on “The Venerable Bede a Church Father?”