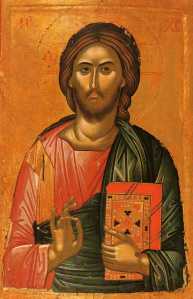 When we look back on my posts agonising over the fate/state of Anglicanism, I must admit that I do not regularly attend a Scottish Episcopal Church anyway. I spend my Sundays with the Free Church of Scotland (‘Wee Frees’) as well as a bi-weekly Bible study, and occasionally turn up at St. Andrew’s Orthodox Community, Edinburgh’s Eastern Orthodox Church, situated on the edge of the Meadows. I spent Sunday evening with the Wee Frees this week, and Tuesday with the Orthodox.

Wednesday, for those who keep track, was the Mid-Feast of Pentecost in the Orthodox Church. So Tuesday evening’s vespers were the vespers for that event. I was surprised but pleased that there were three Lessons (to use Anglican terminology).

After vespers, Father Raphael led us in 100 Jesus Prayers:

Lord Jesus Christ, Son of God, have mercy upon us.

We all sat in the chairs and benches that take up less than half the floor space of this church’s nave and prayed with Fr. Raphael. Most remained silent, but the woman behind me prayed the prayer very quietly with Fr. Raphael at times. I said it in my head or under my breath.

I tried the technique I picked up from Catholic Franciscan John Michael Talbot of breathing in during ‘Lord Jesus Christ, Son of God,’ and breathing out during ‘have mercy upon us.’* Sometimes I prayed with my eyes closed, sometimes I looked at the icon of Christ on the iconostasis, other times I looked at the roundel on the ceiling of Christ Pantokrator (All-powerful) that takes the place of a dome in this little church.

The effectg was very calming, especially with the breathing. No doubt there was something psychological about it, but I do not imagine for a moment that there was nothing spiritual going on.

At the Name of Jesus, every knee shall bow, after all.

There Christ stood in the icons, his face stern but not angry (I confess that sometimes in older Byzantine icons he looks angry to me). Almighty. Pantokrator. Looking upon us gathered to pray to him for mercy.

For a PhD student in the midst of working on a writing sample, a thesis proposal, a grant application, plans to visit around 30 monasteries in the next two years, and trying to keep his sanity, what greater mercy could there be than calm?

I believe that through those Jesus Prayers, the Lord Jesus Christ had mercy on me. A sinner.

*See his book The Music of Creation. Note also his new song on the CD Worship and Bow Down that is about breathing prayer.