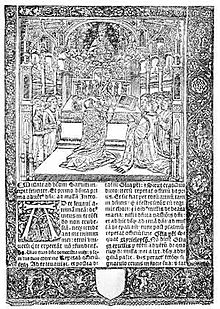 Given my recent series about the sources for early mediaeval liturgy,1 I thought it would be appropriate to do some Advent blogging about these prayers. However, I discovered last night that the Gelasian and Gregorian Sacramentaries do not have collects for Advent. Sarum Use, however, does. And the Sarum Collect for Advent 1 is familiar yet foreign to Prayer Book Anglicans:2

Stir up, we beseech Thee, O Lord, Thy power, and come, that we may be accounted worthy to be rescued by Thy protection; from the threatening dangers of our sins to be set free by Thy deliverance. Through Jesus Christ our Lord…

Because of ‘Stir up, we bessech Thee, O Lord,’ we automatically think of the Collect for the Sunday Next Before Advent (aka ‘Stir-up Sunday’ —  the day the Christmas puddings are made). However, in Sarum Use, that Collect is for Trinity 24, just like in the BCP:

Sir up, we beseech Thee, O Lord, the wills of thy faithful people; that they, plenteously bringing forth the fruit of good works, may of Thy lovingkindess be more plenteously rewarded. Through Jesus Christ our Lord…

Two differences exist between this collect after the Use of Sarum and Cranmer’s version in the BCP: 1. ‘of Thy lovingkindess’ becomes ‘of thee’ in the Prayer Book, and 2. ‘more plenteously’ is simply ‘plenteously’. I admit to having no theories as to why the former change was mode. The latter seems to be made to make the sentiment more Protestant. That is, we are hoping to be plenteously rewarded, full stop. No ‘more plenteously’, since our good works do not change the acting of God’s grace and lovingkindess upon us. This, at least, is my theory. Feel free to disagree/offer your own.

I like the connection between Trinity 24 and Advent 1 in Sarum. The final Sunday in the Church Year is thus intimately linked with the first. Endings are united with beginnings. We are asking the Lord to stir up for us. In Trinity 24, it is our own wills we want Him to stir up. As the Prayer Book collect for Trinity 19 says, ‘forasmuch as without [God] we are not able to please [God].’ So we ask Him to stir up our wills that we may do the good works he requires of us.

In Advent 1, we are beseeching God to stir Himself up. We are asking Him to come, seeking His Advent in the here and now (this is, in some ways of thinking, e.g. St Bernard of Clairvaux, the second coming, whereas Christ at the Final Judgement is the Third). I have no doubt this is precisely the sort of prayer that Reformers were wary of; observe its lack of presence in the BCP! The prayer asks ‘that we may be accounted worthy’, and the oft-repeated refrain of the Reformation is that our worthiness has nothing to do with it. To many ears, this sounds like a diminution of grace.

But perhaps it is not.

I mean, we are asking to be ‘accounted’ worthy. Not to be worthy. If anyone is aware of his own unworthiness, it is the mediaeval Christian. Read St Thomas a Kempis if you don’t believe me. We are not worthy, but God can account us worthy, see us as worthy. This is entirely His own free gift. This is grace.

And what do we want, having been account as worthy by God? His deliverance. We want to be rescued from our sins.

At the beginning of this holy season of preparation for the Feast of the Nativity, we are asking God to deliver us from our sins, to make us holy. A good place to start, don’t you think?