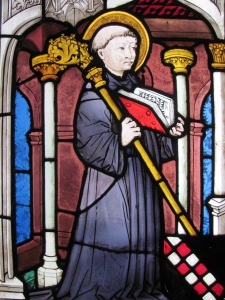 Last time, I broached the subject of choosing the abbot towards the end of my discussion of rank in the monastery. The abbot should be chosen unanimously. I know a clergyman who has only even accepted a parish when the selection committee has been unanimous in its choice of him. Wisdom there, I think.

And what sort of man should be chosen?

The one to be appointed should be chosen for his virtuous way of life and the wisdom of his teaching, even if he is the lowest in rank in the community. (ch.64; p. 101 trans. White)

The only way for someone to cultivate the character of Benedict’s abbot is lots of prayer and Scripture. These are the two things the Benedictine life is most devoted to. Hopefully, then, a potential abbot has been well-shaped! In terms of modern application, we must free up our clergy who sometimes seem to me like administrators and undertrained psychologists who preach once a week rather than priests of God and shepherds of holiness.

Indeed, if you read the lives of the early Cistercians, Stephen Harding, Aelred of Rievaulx, Bernard of Clairvaux, you will see men well-beloved by their communities.

Finally, we circle back to the universal monastic virtue of discretion (discussed by Cassian):

Taking these and other examples of discretion, the mother of all virtues, let him be moderate in all things. (ch. 64, 103 English)

One thought on “Blogging Benedict: More on abbots”