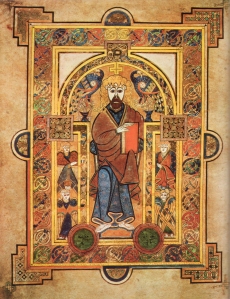 Several times on this blog I have taken the modern conceptions of Late Antique and Early Mediaeval Insular (‘Celtic’) Christianity to task.^ In the spirit of truth-seeking, I have decided to provide a page listing our sources for the Early Mediaeval period in the isles of Britain, Ireland, Man, the Western Isles, etc. If you are really interested in true Celtic spirituality, I recommend these sources over such groups as the Northumbria or Iona Community or, indeed, much of the ‘Celtic spirituality’ craze; these latter groups may be helpful spirituality, but they may not be especially Celtic. As I mentioned once before, what we need is a ressourcement for Celtic Christianity, a return to the sources themselves, rather than whatever ideas strike our fancy. Ad fontes!

Below, I list many sources up to 793; it seems there are more than I thought, so I won’t/can’t list them all! A lot of people stop ‘Celtic’ Christianity at 664, an action I disagree with, but even if you choose to, many of the sources dealing with the earlier period are much later. I choose 793 because that is the beginning of the Viking raids on Britain and Ireland that changed the face of church in a number of ways. Perhaps ‘Viking Age Insular Spirituality’ is also worth investigating — not quite as catchy, though!

The Anglo-Saxon sources are as important as the Irish and Scottish sources, including as they do the Venerable Bede who gives us so many historical details for the early period of Christianity in Britain. They are arranged chronologically, but I’ve asterisked (*) those I recommend for starting places, as well as giving places to go for the material culture and art following the written sources.

Also, do check out the Ecclesiastical Sources at The Celtic Literature Collective and the list of Irish texts published at CELT, the Corpus of Electronic Texts.

The Life of St Declan of Ardmore. The life of a probably contemporary of St Patrick’s in Ireland.

A great resource is Iona: The Earliest Poetry of a Celtic Monastery; this includes some works by St. Columba himself, such as the one I appended to the end of my brief bio for him the first time he was Saint of the Week.*

Adamnán’s Life of St. Columba (7th century). Available online and as a Penguin Classic.* There is also a monastic rule attributed to St. Columba (d. 597).

St. Columbanus (541-615). I have discovered his Sermons, Letters, and Rule online as well as his very interesting Boat Song. He was an important part of the Insular contact with the Continent, coming from Ireland and founding monasteries at Luxueil and Bobbio, both of which were important in the Merovingian and Carolingian age. You can read a seventh-century account of his life online as well, written by Jonas, who became a monk at Bobbio three years after Columbanus’ death.

The sixth-century Rule of the Celi De, given by St Maelruain of Tallaght.

There is a version of the Voyage of Brendan here; a different version — that which I have read — has been translated for Penguin in the volume The Age of Bede, itself an expansion upon the earlier (out-of-print) book Lives of the Saints. Brendan himself is sixth-century, the accounts of the voyage are ninth-century.*

The Stowe/Lorrha Missal. This is a ninth-century Latin-Gaelic missal that some believe is a copy of a pre-650 missal. I am pleased to have found much of it in English online, as many other early mediaeval liturgical manuscripts are available online but only in Latin, such as the Antiphonary of Bangor.

The Life of St. Kentigern (Mungo), patron saint of Glasgow. Kentigern died in 603, but this life by Jocelyn, Bishop of Glasgow, is from the 12th century.

Esther de Waal. God Under My Roof: Celtic Songs and Blessings. Fairacres: SLG Press. Not actually Early Mediaeval, but still a part of the fabric of life in the Isles.

Definitely browse through Treasures of Early Irish Art, an exhibition catalogue from the Metropolitan Museum of Art, fully available online.*

Along a similar vein is Early Medieval Scotland: Individuals, Communities, and Ideas published by the National Museum of Scotland.

The Book of Kells, an illuminated Gospel book now in Trinity College, Dublin, is one of the most beautiful manuscripts from the world of Scottish-Irish Christianity, and available online.*

Iona Abbey has a very good website put together by Historic Scotland where you can learn the history and view the objects discovered on the island and associated with the monastery.*

Of probable interest is Art of the Celts: From 700 BC to the Celtic Revival by Lloyd and Jennifer Laing. I’ve not read it, but it seems a good place to start; it’s part of Thames & Hudson’s ‘World of Art’ series.

Although I am not entirely sure how to navigate their collection without prior knowledge of which manuscripts are early mediaeval, if you like manuscripts, check out Irish Script on Screen.

Gildas (c. 500-570), a British monk, wrote a very moralising text On the Ruin of Britain. An excerpt is available online through the Internet Medieval Sourcebook, and the whole thing is available along with Nennius in J. A. Giles’ 1841 translation.

The Annales Cambriae (Annals of Wales) for the years 447-954, giving us events in both Wales and Ireland. Late antique and early mediaeval chronicles are very important sources for the events of these centuries.

An explicitly Christian anthology is Sr Benedicta Ward’s book, Christ Within Me: Prayers and Meditations from the Anglo-Saxon Tradition.* A further source of Anglo-Saxon Christian literature and wisdom, complete with contemporary application, is the blog A Clerk of Oxford.

The Dream of the Rood is available online and in Anglo-Saxon Poetry.*

The Venerable Bede (7th-8th century): Life of St. Cuthbert* is online and in The Age of Bede as well — this volume includes Bede’s Lives of the Abbots of Wearmouth and Jarrow as well as Eddius Stephanus’ Life of St. Wilfrid.

St. Boniface (8th century), a great missionary to the continent. The Life of St Boniface is available online as well as his letters.

The Anglo-Saxon Chronicle. Although begun by King Alfred after our period, it covers the period in question and is of much use.

The Lindisfarne Gospels. My favourite manuscript of all time, dating to the early eighth century.*

^My favourites of these are: An Excursus on the Synod of Whitby; The Ruthwell Cross and Caution When Analysing Historical Christianity; A Few Thoughts About ‘Celtic’ Christianity; Rosslyn Chapel, ‘The Celts’ and the Christianisation of Europe. For all posts that relate to the church in Celtic-speaking lands, including those that are more cheery, see the Post Category, ‘Celtic Christianity.’

One thought on “9. Sources for ‘Celtic’ Christianity”