What follows will likely either offend some Christians in different ways whilst leaving most thinking, ‘So what?’ I hope it will appeal to somebody out there (maybe a Classicist or two), and I have no doubt, if I’m right, a biblical scholar has already addressed the bit where I talk about Greek. #philologywillsavetheworld

In Chapter 8 of A World Transformed, ‘Being Reborn’, Lisa Deam discusses the Ebstorf Map, from c. 1300, where Jesus’ head, hands, and feet peek out from behind the round globe of the world. She argues that this represents Jesus pregnant with the world. Not being an art historian, I can neither affirm nor deny this idea. It’s kind of neat — I’ll take it from Deam, who is an art historian, that this is a feasible interpretation of the map. Here it is: 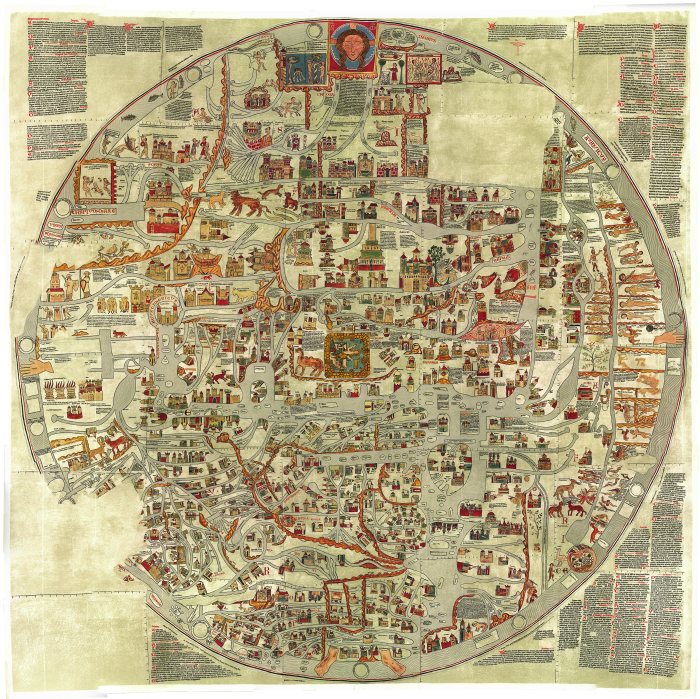 This leads into a discussion of medieval piety to Jesus as mother. Interestingly, Julian of Norwich doesn’t come up, possibly because Julian’s references to Jesus as mother are so fleeting as to be almost content-less (in my non-expert opinion). Instead, we get something much more powerful, much more vivid, combining late mediaeval crucifixion piety with the image of Jesus as mother. Deam quotes Marguerite d’Oingt (d. 1310), A Page of Meditations, one of whose passages is this:

Oh, Sweet Lord Jesus Christ, who ever saw any mother suffer such a birth! But when the hour of the birth came you were placed on the hard bed of the cross where you could not move or turn around or stretch your limbs as someone who suffers such great pain should be able to do; and seeing this, they stretched you out and fixed you with nails and you were so stretched that there was no bone left that could still have been disjointed, and your nerves and all your veins were broken. And surely it was no wonder that your veins were broken when you gave birth to the world all in one day. (World Transformed, p. 104)

First, given that this piety is around the same time as the Ebstorf Map, this lends weight to Deam’s interpretation.

Second, this is, I think, totally acceptable, along the same lines as ‘Jesus is my boyfriend’ (that is, keep it to yourself; don’t add it to the liturgy). It is a pious meditation upon the salvific event of the crucifixion of our Lord and Saviour. And it is a realisation that his death brings life. His agony allows me to breathe. The cross, as the ultimate kairos, is an event with trans-temporal significance, backwards to Abraham and Adam, forwards to Judgement Day. The true life of the world is brought forth in the cross.

The theology expressed in what, for us, is entirely novel, is also entirely in keeping with the theology of St Irenaeus of Lyons or St Ephraim the Syrian.

Deam also points out that has nothing to do with the historical gender of the real Jesus. God the Word Incarnate may have had two natures, but he had only one sex. Jesus was a man. This has more to do with seeing His role in our lives and in salvation history in a light we’re not used to.

The argument leading up to Marguerite is also of interest, reminding us of the various biblical passages where God and Jesus are discussed with maternal imagery. Jesus even uses it of himself, after all! I, however, am one of those people who are quick to say that a metaphor or image doesn’t have anything to do divine names or attributes, but points beyond itself to the divine Person in some other aspect of His Person(s). God the mother is about the oikonomia of God the Father acting in our personal and world salvation history, not about renaming the First Person of the Trinity.

God as Father fulfils all the functions of fathers and mothers perfectly. But God is not named Mother in Scripture; therefore, I refuse to use feminine pronouns for God and I refuse to call God ‘Mother’.

God raised him up, loosing the pangs of death, because it was not possible for him to be held by it. (ESV)

The word for ‘pangs’ here is τὰς ὠδῖνας. Following Margaret Hammer, Deam renders it ‘birth pangs’, because this is exactly what the word means in Greek. If you check your big, fat Greek dictionary, this is what you’ll find under ὠδίς. It can, however, be used metaphorically, in which case St Peter is not necessarily saying that Jesus was giving birth to the world. In fact, the ὠδῖνας under discussion are not necessarily those that Jesus went through, in the first place. They are what Jesus has loosed, has set free by his death (λύσας from λύω).

Thus, it is our ‘birth pangs’ that Jesus has loosed, not ours.

But I don’t think that St Peter said τὰς ὠδῖνας in the first place, because he would have been preaching in Aramaic, right? If you read the entry for ὠδίς in Liddel & Scott to the end, you’ll find citation of the word in the plural to mean ‘bonds’:

the cords of Sheol entangled me;
the snares of death confronted me.

the cords of Sheol entangled me;
the snares of death confronted me.

The difference between ‘cords of Sheol’ and ‘pangs of Sheol’ is the length of the first vowel in Jebel. You can see how the translators of the Septuagint (the Greek Old Testament, aka LXX) could easily have mistaken the Hebrew, given that Hebrew is written in consonants with little markings to represent vowels. If we imagine that Acts 2:24 is, in fact, parallelling 2 Sam. 22:6/Psalm 18:5, then we see St Peter drawing a scriptural parallel, using scriptural language for the great, powerful, salvific act that is Jesus’ death and resurrection.

It works with both the wider and immediate context.

So, in sum: If you want to imagine Jesus as your spiritual mother, that’s totally legit. It’s a medieval thing. It’s not my style, but whatevs. However, I don’t think Acts 2:24 has anything to do with it.

Theology and Commentary on Things Catholic