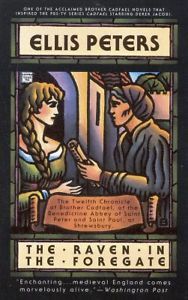 I recently read the Brother Cadfael mystery novel The Raven in the Foregate by Ellis Peters. Set at Christmastide 1141, in this novel, the people of the Foregate — the parish area just outside the abbey of Sts Peter and Paul and the town of Shrewsbury — get a new priest after their old priest, Father Adam, passed away. Fr Adam had been a kind and indulgent man, aware of the weakness of the human spirit and always ready to welcome a penitent sinner.

The new priest, Father Ailnoth, was an entirely different species of priest. Ailnoth had hitherto been a bishop’s clerk and knew little of the ways of parish life, the faults and foibles of ordinary people, their sins large and small. In his first few weeks, he strikes young boys with his staff for playing ball games against the wall of his house; he refuses to baptise a sickly infant on the spot because he is in the middle of praying the office — the infant dies, and he refuses to bury it in the churchyard because it was unbaptised (!!); he alleges that a man in his service was villein, not free; he drives away from him a young woman of the Foregate who slept with a lot of men, but would inevitably feel compunction for a spell and repent before, eventually, turning to the company of whatever man next asked. She, in fact, was found drowned after he refused to hear her confession. Oh, Ailnoth also accused the baker of his measure being short.

In sum, a strong and unbending man of mighty will with little care for the dignity of others. A man with a sense of his own virtue so strong it blotted out his compassion on those weaker than him.

Vainglory, according to Cassian, Evagrius, and Climacus, is a sin reserved for the virtuous.

It can harden the heart, as it did Father Ailnoth.

Father Ailnoth reminded me of a historical event that Leo the Great discusses in letter 167.

This letter was sent to Rusticus, Bishop of Narbonne, in the second half of the 450s, and is most read and recopied for the series of questions the Roman Bishop answers for his Gallic colleague. In the preface of the epistle, however, Leo address some more specific concerns of Rusticus’. The first of these had to do with two Narbonnais presbyters who had been tried by local ecclesiastical and secular men of rank, and found guilty for being overzealous in their duties of reproving sinners (in this case, adulterers). Leo encourages Rusticus not to be too hard on them, ‘since they have of their own accord removed themselves from the disputes they had begun’. He reminds his Gallic colleague that spiritual medicine should be applied to heal, writing:

you should act mildly with those who in their zeal for chaste behaviour seem to have exceeded the limit in vengeance. One should not let the Devil, who has deceived adulterers, rejoice in the punishers of adultery.

All of this unseemly business has left Bishop Rusticus wishing to retire. Leo proceeds to reprove him for this desire, and in the midst of this he puts forth one of his pithy statements, one that has always stuck with me:

Sins are to held in hatred, not men.

You could say ‘people’ or ‘human persons’ for ‘homines’, but ‘men’ is so nice and short, it keeps the saying pithy. Besides, etymologically ‘man’ has the same gender inclusive overtones as ‘homo, hominis’.

Father Ailnoth with his own unbending vision of virtue seems to have forgotten this adage of Leo’s (which was certainly known in England by 1141 through Lanfranc’s canonical collection of the 1070s). To the modern ear, Leo may often sound harsh and unbending, but I believe that he is flexible as a pastor — he will not bend on what he believes the truth is, but the penitent sinner or heretic is always welcome back into the catholic fold if he or she gives proof of a true change of heart and/or mind.

Father Ailnoth was not so flexible.

We should keep these examples in mind as we go into the world today and interact with a culture that in many areas does not live up to traditional, biblical standards of morality and ethics — whether we speak of such standards from a more ‘right’ or more ‘left’ position.