Every Sunday morning, I get up at the beginning of church and say a little something about where we are in the church year, highlighting an upcoming saint’s day. So far, I’ve done St Matthew the Apostle (my namesake!), St Michael the Archangel (my brother’s namesake!), St Francis of Assisi (whose feast was actually a Sunday!), St Luke the Evangelist (whose feast was also a Sunday but was used to promote the idea that Every Sunday is Easter instead), and Reformation Day.

Reformation Day is All Hallows Even, and it is the commemoration of Martin Luther pinning the 95 Theses to the church door at Wittenberg. Rather than discuss the 95 Theses themselves — they are mostly about papal indulgences and ecclesiastical abuses — I talked about the importance of the doctrine of justification by faith alone, saying that although there are many sorrowful things to have arisen in the tradition of the Reformation — and people like me who enjoy things pre-modern tend to focus on them — justification by faith alone is the main business of the affair, and it is worth holding on to.

Nothing you do can make you right with God. You just have to trust Him. That’s what faith is. That’s what brings us into right relationship with God.

Now, I have to admit straight out of the gate that I am about to utter a hunch that would require a deeper knowledge of Luther and the magisterial Reformation as well as of Late Mediaeval theology in order to become a thesis, but my hunch is that much of Luther’s teaching on sola fide is not actually counter to the mediaeval, catholic tradition in and of itself, although cranky old man Luther would probably have disagreed after a few pints. My hunch is that Luther’s sola fide represents a legitimate flowering of pre-existing trajectories with Latin catholic thought that, because of other things he said and did, was rejected at Trent (or was it — when Trent’s not being anti-Protestant, the Council Fathers say some beautiful things).

Certainly the whole tradition, East and West, ancient and medieval and modern, Catholic and Protestant and Orthodox, has its lucid moment of what sounds a lot like justification by faith alone. I’m still trying to sort this out, but I’ll close with a quotation from Drinking from the Hidden Fountain, an anthology of daily readings from the Fathers by Thomas Spidlik. This quotation emerged last Saturday just after I had finished meditating on what to say about Reformation Day:

Anyone who is a slave to sin should prepare himself for true regeneration by means of faith. He must shake the hoke of sin off his back and enter the joyful service of the Lord. He will be thought worthy to inherit the kingdom.

Don’t hesitate to declare yourselves sinners. Thereby you will put off your old humanity that was corrupt because it followed the bait of error. And you will put on the new humanity, the humanity newly clad in intimacy with its Creator.

Don’t say: ‘I have been dishonest, an adulterer, I have committed grave offences innumerable times. Will he forgive them? Will he deign to forget them?’ Listen rather to the Psalmist: ‘How great is your love, O Lord.’ (Ps. 31:19)

You sins piled one above the other do not overtop the greatness of God’s love. Your wounds are not too great for the skill of the Doctor.

There is only one course of treatment for you to follow: rely on him in faith. Explain frankly what is wrong to the Doctor and say with the Psalmist: ‘I acknowledged my sin to you, and I did not hide my iniquity.’ (Ps 32.5) Then you will be able to go on with the Psalmist to say: ‘Then did you forgive the guilt of my sin.’ 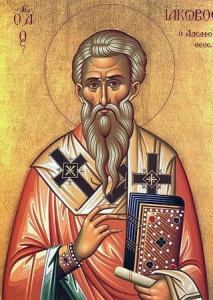 This coming Tuesday is the feast of St James, the brother of our Lord, and first bishop of Jerusalem. To celebrate this feast, my church has decided to worship using the Liturgy of St James! How cool is that? This is precisely the sort of way I would like to celebrate a saint as well — worship God in a way (descended from how) he did!

For example, reading St Anselm’s Meditations on the feast of St Anselm. Using a 1552 BCP to commemorate Cranmer? Using the Private Devotions of Lancelot Andrewes on his commemoration. Praying the Jesus Prayer to commemorate St Gregory Palamas. Or maybe reading The Triads. I like reading their works — read Ambrose on his feast, Augustine on his own, likewise Basil, the Gregories, Chrysostom. Read about Augustine of Canterbury for his. That sort of thing.

And what is the Divine Liturgy of St James?

It is one of the oldest liturgies of the church, especially when we reduce the body of liturgies examined to those in continual use. Some suspect it is the oldest, but that’s a difficult thing to prove definitively. It is a traditional eucharistic liturgy from the church in Jerusalem, hence its association with St James. The traditional liturgy of a city is often associated with its first bishop, or, at least, a famous one — so, St Mark in Alexandria, but St Ambrose in Milan and St Gregory the Great in Rome.

It is unlikely to have been the actual divine liturgy used by St James, just as the entirety of the Divine Liturgy of St John Chrysostom is not John Chrysostom’s (the anaphora is, though, as demonstrated by Robert Taft some years ago). From what I gather over at the OrthodoxWiki, the liturgy as we have it is probably a fourth-century version of the traditional Jerusalem liturgy, maybe from the time of St Cyril.

That said, there is definitely a pre-Cyril, indeed Ante-Nicene, substratum to this text. Some claim that you can see elements of Aramaic idiom in some parts of the liturgy. This I cannot say, but I can say that to this day it is the divine liturgy of many Syriac-speaking churches. It includes the ‘lift up your hearts’ (sursum corda) section at the beginning of the anaphora, in common, then, with the third-century Apostolic Tradition (attributed by scholars to Hippolytus), the Divine Liturgy of St John Chrysostom, the Roman Mass, and the Book of Common Prayer.

It is a beautiful liturgy, full of deep theology — read it here.

What do we gain if, this Tuesday, we celebrate Holy Communion with this liturgy, like the Eastern Orthodox churches (and my church)?

Well, regardless of which liturgy one uses, the mystic union of the sacrament of Holy Communion is always a moment of grace. In less important ways, using this liturgy is a way to connect through time and space with other Christians and honour one of the leading apostles. Praying these prayers joins with many centuries of Christian worship. It joins us with Jerusalem, the Holy City. It cuts through time and space.

That’s pretty cool. It thus serves as a reminder of the ongoing reality of our holy, wholly powerful, God.