For the Monday of Easter week, George Herbert. First, an image from the edition of 1633, then the text for ease of reading:

Lord, who createdst man in wealth and store,
Though foolishly he lost the same,
Decaying more and more,
Till he became
Most poore:
With thee
O let me rise
As larks, harmoniously,
And sing this day thy victories:
Then shall the fall further the flight in me.
My tender age in sorrow did beginne
And still with sicknesses and shame.
Thou didst so punish sinne,
That I became
Most thinne.
With thee
Let me combine,
And feel thy victorie:
For, if I imp my wing on thine,
Affliction shall advance the flight in me.

I realise we are a week off from each other this year, but I’ll still commemorate western Easter with Orthodox prayers! These are some favourites from the book of prayers called the Octoechos. Father Raphael says that the Octoechos contains all the theology of the Orthodox church. Here are three prayers from the Octoechos:

Let the heavens rejoice, and let the earth be glad! For the Lord hath shewed strength with his arm, and trampled down death by death. He is become the first-born from the dead. He hath delivered us from the pit of hell, and hath bestowed his great mercy upon the world. -Tone 3 for Sundays

O praise and worship, O ye faithful, the Word, who with the Father and the Holy Ghost together is everlasting, born of the Virgin for our salvation: for he was pleased in flesh to mount the Cross and suffer death, and in his glorious Resurrection to raise the dead. -Tone 5 for Sundays

Thou from on high didst come in tender mercy, and didst endure the three days’ burial to free us from our passions: O Lord, our Resurrection and our life, glory to Thee. -Tone 8 for Sundays

My absolute favourite has been blogged here before, an Apolytikion of the Resurrection.

He is risen, indeed! 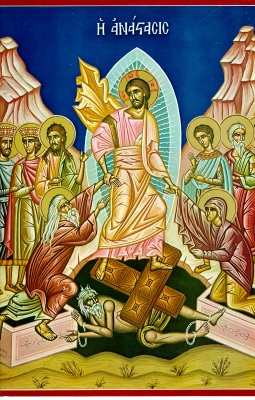 Ever since I heard someone on Easter Sunday praying and leading worship with almost no mention of the Resurrection but many references to the crucifixion (the sermon was good!), this has been rolling around in my head, taking shape along the way. Since it’s still Easter, it’s still seasonal. And, hey, it was Orthodox Easter two days ago! Anyway, as the title of this post says:

This should be obvious, if you ask me. It clearly isn’t, as my anecdotal introduction demonstrates. I also watched, around Eastertide, a video someone posted on the Facebook of some hillbilly (he actually called himself a hillbilly; I have nothing against hillbillies, they are a noble people) saying that the point of the resurrection was to show that the crucifixion worked. Perhaps not so crudely, but that was the gist.

A lot of evangelicals express their faith this way. I was at a big evangelical church in London on Sunday (the Second Sunday After Easter by how people reckon Sundays today), and we sang a hymn that had several lovely lines in it about the crucifixion, and one (one!) about the resurrection. And the minister did not preach on the Resurrection. Easter is, apparently, a one-day event that comes once a year. Otherwise, this whole Eastertide thing might interfere with your plans to do a sermon series on one of the Pauline epistles.

One year on Easter Sunday, one of my Truly Reformed acquaintances remarked, ‘I know why, historically, Jesus had to rise from the dead, but I don’t get the theology of it, since the crucifixion atoned for sin.’

Not that evangelicals and Protestants are alone in this. Consider the crucifixes and statues of Christ’s slain body of Roman Catholic Europe, the magnificent medieval poetry of the Passion, the plays of the Passion, the paintings of the crucifixion, the medieval devotion to the dying Christ, the fact that Julian of Norwich explicitly had a vision of Christ on the cross.

Sometimes, I think people forget that we are oned to God because Jesus lives.

Indeed, the resurrection is the very real, living heart of the Christian faith.

In 1 Corinthians 15, St Paul gives a summary of the faith that some scholars (like Gerald O’Collins, The Easter Jesus) think is an early liturgical, credal statement. It takes verses 3-7; 3 and a phrase in 4 cover the crucifixion. 4-7 are about the Resurrection appearances of Jesus. A man coming back from the dead changes everything.

Jesus did not simply die to save you from your sins.

Jesus Christ rose from the dead to kill death itself.

Death is the great leveler of human existence, and we all avoid it. Survival is one of our base, animal instincts. Achilles, in Hades in The Odyssey 11, tells Odysseus that he would rather be a slave among the living than a prince among the dead (that was Achilles, right?). Death is so noxious that even Jesus Christ groaned/wept at the death of Lazarus — before raising Lazarus from the dead!

With the lightning flash of his Godhead, as the Orthodox pray, Jesus has slain death. Magnificent. This is Easter.

If you are blessed to go to a Prayer Book church, this Easter faith would be unmistakable — behold the Easter anthems, the heart of the Easter faith, biblical Christianity:

Christ our passover is sacrificed for us: therefore let us keep the feast;

Not with the old leaven, nor with the leaven of malice and wickedness; but with the unleavened bread of sincerity and truth. (1 Cor 5:7)

Christ being raised from the dead dieth no more; death hath no more dominion over him.

Likewise reckon ye also yourselves to be dead indeed to sin, but alive unto God, through Jesus Christ our Lord. (Ro. 6:9)

Christ is risen from the dead, and become the first-fruits of them that slept.

Let’s stick with BCP for the rest of this post, considering the heart of the book, the Epistles and Gospels for Eastertide.

Remember Jesus Christ, risen from the dead, of the seed of David, according to my gospel … For if we be dead with him, we shall also live with him. If we endure, we shall also reign with him.

The Gospel for a second service is the Resurrection in Mark 16.

Elsewhere in the daily office at Eastertide, we see prophecies of God conquering death, of reclaiming his people to himself, of the great and glorious day of the Lord, or praise and rejoicing in the face of God.

I assume the Revised Common Lectionary is similar.

Easter is our salvation. Jesus proves his innocence by the empty tomb. Jesus, in fact, leaves the tomb precisely because he is both God incarnate and an innocent man. This is not the proof that Good Friday worked, but a glorious, amazing event all by itself.

It is the Resurrection that fuelled the disciples into apostles. It is the resurrection of Jesus that points to our future resurrection, when we shall sow a corruptible body and be raised incorruptible! (Again, 1 Cor 15)

Recently, someone posited that if we set 1-2 Corinthians at the centre of Paul’s corpus instead of Romans and Galatians, we would have a different emphasis in our theology. I see here that we would, perhaps, do a better job at keeping the Resurrection, the rising of a dead man from the grave, the restoration of fulness of life of a person who was completely dead, at the centre of our faith.

I wonder how our Christian walk, worship, churches, Bible reading, love of others, would change if we (myself included) lived in a daily remembrance and joy at the fact that Jesus Christ has ‘overcome death, and opened unto us the gate of everlasting life’ (BCP Collect for Tuesday in Easter Week).

Troparion  Christ is risen from the dead, trampling down death by death, and upon those in the tombs bestowing life.

Kontakion  Thou didst descend into the tomb, O Immortal, Thou didst destroy the power of death! In victory didst Thou arise, O Christ God, proclaiming “Rejoice” to the Myrrhbearing Women, granting peace to Thine Apostles, and bestowng resurrection of the fallen.

Doing with the Rule of St Benedict something similar to what I did with The Philokalia, vol. 1, I ask: Where is Easter?

From holy Easter until Pentecost without interruption let “Alleluia” be said both in the Psalms and in the responsories. From Pentecost to the beginning of Lent let it be said every night with the last six Psalms of the Night Office only. On every Sunday, however, outside of Lent, the canticles, the Morning Office, Prime, Terce, Sext and None shall be said with “Alleluia,” but Vespers with antiphons.

The responsories are never to be said with “Alleluia” except from Easter to Pentecost.

All of the references to Easter are in terms of computation, in terms of the Church Year and how to pray the office.

But the above gives us a glimpse of what it means to be an Easter people.

This is the natural, automatic response to the unbelievable reality not simply that we worship a crucified God, but that a Man has risen from the dead, trampling down death by death. I cannot help but think of the character of Bartholomew in the film Risen and his unquenchable joy and happiness.

I hope we can call have a taste of that today.

From St Gregory of Nazianzus

No, let’s offer Him our very selves, that which is most valuable to God, and most fitting as an offering! Let’s give back to the Divine Image what is made according to that Image. Let’s acknowledge the dignity of our own creation; let’s honour Him who is our Model. Let’s experience the power of the Mystery of His salvation, and the purpose of His death. Let’s become like Christ, since Christ became like us. Let’s become divine people for Him, since He became human for us.

He took upon Himself the worse, to bestow on us the better; He became poor that we, through His poverty, might become rich; He came down to lift us high; He was tempted that we might gain victory; He was shamed to glorify us; He embraced death that He might give us salvation; He ascended heavenwards that He might draw to Himself those who were lying prostrate, fallen through sin. Let us give all, let us offer all, to Him who gave Himself as the price of our redemption and our reconciliation. But we can give Him nothing as precious as ourselves.

For Ash Wednesday, I give you selections from the Rule of Benedict, chapter 49:

The life of a monk ought at all times to be Lenten in its observances but because few have the strength for this, we urge that in Lent they should maintain a life of complete purity to make up, during these holy days, for all the careless practices throughout the rest of the year.

In other words he must cut down on food, drink, sleep, talkativeness, joking, and should look forward to holy Easter with the joy of spiritual longing. (trans. Carolinne White)

May you have a holy and blessed Lent as we look forward to Easter.