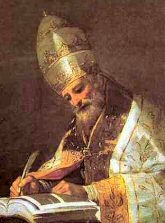 Around the year 600, a wandering monk named John Moschos composed a curious little collection of vignettes and sayings called The Spiritual Meadow — each of the little snippets is meant to be like a wild flower in bloom, delighting in its beauty. Some of them most assuredly are; others are a little more dubious…

One such story of Chalcedonian apologetic is chapter 147 which runs thus:

Abba Menas … also told us that he had heard this from the same Abba Eulogios, Pope of Alexandria:

When I went to Constantinople, [I was a guest in the house of] master Gregory the Archdeacon of Rome, a man of distinguished virtue. He told me of a written tradition preserved in the Roman church concerning the most blessed Leo, Pope of Rome. It tells how, when he had written to Flavian, the saintly patriarch of Constantinople, condemning those impious men, Eutyches and Nestorios, he laid the letter on the tomb of Peter, the Prince of the Apostles. He gave himself to prayer and fasting, lying on the ground, invoking the chief of the disciples in these words: ‘If I, a mere man, have done anything amiss, do you, to whom the church and the throne are entrusted by our Lord God and Saviour Jesus Christ, set it to rights.’ Forty days later, the apostle appeared to him as he was praying and said: ‘I have read it and I have corrected it.’ The pope took the letter from Saint Peter’s tomb, unrolled* it and found it corrected in the apostle’s hand. (Trans. John Wortley for Cistercian)

I am not sure how old the story is; likely not much older than Moschos. Moschos’ stories that affirm Chalcedon in The Spiritual Meadow are the same sort of thing the Monophysites had in John Rufus’ Plerophoriae. By gaining St. Peter’s apostolic stamp of approval, the Tome is declared to be authoritative. Anyone who doubts can rest at ease knowing that the imperial church is in the good books of the Prince of the Apostles.

This sort of Chalcedonian affirmation in Moschos is very different from that in Cyril of Scythopolis, where the defence of Chalcedon comes in the form of speeches made by his monks. Yet both methods are in keeping with the general tone of each author. While Cyril includes some miracle stories, Moschos includes almost nothing but, save when he drops in the occasional apophthegm. Cyril gives us complete biographies, Moschos flashes of light in time. They both produce for us discours hagiographique, but each is very different from the other, Moschos going for flare, Cyril going for the more “down-to-earth”.

Still, if you were having doubts about Leonine Christology, your fears can now be assuaged by John Moschos! (Think also on those heretics burning in Hell.)

*This translation constantly refers to people unrolling books; I’ll have to check the Greek, for I can think of no reason why people would be using scrolls at so late a date.