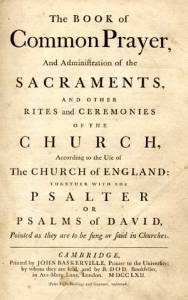 A lot of people believe that crafting and following a Rule of Life is a wise way to approach Christian discipleship, inspired by the Desert Fathers and Mothers, St Benedict, St Augustine, the Franciscans, and others. Indeed, although there is nothing monastic about their rules of life, many evangelicals throughout history have committed their lives to disciplined living and a rule of living, from John Wesley to John Stott.

Rev. Kyle Norman recently published a piece on Ministry Matters, a Canadian Anglican webzine, all about the benefits that come from crafting and following a rule of life. A quick historical quibble: the recommendation to follow a rule of life on p. 555 of the 1962 Canadian BCP is not Cranmer’s. I haven’t tracked down its origin. It is not there in 1662 or the Canadian 1918 revision or the proposed English revision of 1928. It is, perhaps, a minor quibble of a historical matter, but I’m a historian, so these things irk me.

Every Christian man or woman should from time to time frame for himself a RULE OF LIFE in accordance with the precepts of the Gospel and the faith and order of the Church; wherein he may consider the following:
The regularity of his attendance at public worship and especially at the holy Communion.     The practice of private prayer, Bible-reading, and self-discipline.
Bringing the teaching and example of Christ into his everyday life.
The boldness of his spoken witness to his faith in Christ.
His personal service to the Church and the community.
The offering of money according to his means for the support of the work of the Church at home and overseas.

I’ve been thinking recently about what it would take to both craft and follow a Rule of Life. If you’ve put up with reading this blog long enough, you know this isn’t the first time I’ve tried something like this. The likeliness of my success is dependent, I believe, on the external support I have. So I’m going to do a little spiritual bromance to find someone to encourage me on this journey, don’t worry.

As part of this journey, I’ll write about this statement that comes at the end of the Supplementary Instruction of the Canadian Catechism. First, then:

From time to time

I think this phrase is highly significant and likely to be passed over. Now, when they wrote this, I don’t think the revisers of the Prayer Book had my situation in mind. “From time to time, frame a Rule of Life because you can’t stick to one.” I think, rather, they had the necessary flexibility that all these things should hold, in keeping with the historic Protestant approach to the spiritual disciplines.

Despite some unfortunate turns in more recent history, Protestants have historically practised the spiritual disciplines. Our Reformational forebears prayed, read Scripture, meditated on Scripture, fasted, some even confessed sins to one another, engaged in acts of mercy or social activism, ate and dressed with simplicity, and so forth. If they were unmarried, they practised celibacy. Some have lived in communities that hold everything in common.

According to Greg Peters (in both The Story of Monasticism and The Monkhood of All Believers), the main criticism Martin Luther and John Calvin had with monastic practice was the perpetuity of the vows — besides, of course, the spiritual elitism that had arisen in late medieval monasticism. Everything else a monk did, Luther and Calvin were in favour of, and even promoted for the lives of ordinary Christians. But the only lifelong vow a Christian was allowed, according to Scripture, was marriage. Whether you agree with them or not, there is one main takeaway for Protestantism:

Asceticism is not antithetical to Christian living.

What this means for the BCP p. 555 is that if one crafts a rule of life, doing so is not contrary to historic Protestantism, certainly not counter to the magisterial Reformation, of the Lutherans and the Reformed, of which the Church of England is a part. It also means that if you do frame a rule of life, you need to do so with enough discernment that if some aspect of your life changes, your rule of life can change with it.

This means that, even if I had succeeded in maintaining the Rule of Life I drafted myself as a student in Edinburgh in 2014, it would have changed when I was a post-doc in Rome in 2015, and then again back at Edinburgh as a lecturer in 2016, but most drastically, it would have changed — probably would have to have been entirely rewritten — in 2017 when my first son was born. And that’s okay.

The Rule of Life has to be flexible because life on earth isn’t static. We are dynamic beings whose circumstances change. What needs to stay central in a Rule of Life is its focus on helping us love God and love others more and its workability — too rigid a Rule of Life will cause us to abandon it.

So it’s time to consider afresh what a Rule of Life means for me in 2020, father of two, unemployed, living with my in-laws under social distancing recommendations. It’ll change, maybe in a few months or sooner, but that doesn’t mean it’s not worthwhile.