Happy Quinquagesima! (That is, the last Sunday before Lent.) On Wednesday, many of us will have our foreheads adorned with ashes, remembering that we are dust and to dust we shall return. The great preparation for Easter will commence.

What do you plan for your preparatory acts, your Lenten disciplines?

This year, I am going to read Saint Bernard Abbot of Clairvaux: Selections from His Writings, rendered into English by Horatio Grimley (Cambridge: Cambridge University Press, 1910). I picked this up the year I got hired to be a mediaevalists but failed to read it. Since I like to keep a little balance in my spiritual reading, and I just polished off two Russian Orthodox books, I decided St Bernard it would be for Lent this year.

Are you going to read a Lent book?

I am also going to give up Facebook, not only because it can be a waste of time but because it turns into a waste of mindspace even when I’m not on it. I realise that my friends there will miss such things as posts of pictures of Charles “the Hammer” Martel with the phrase, “Stop! It’s Hammer time,” but I think they’ll make it to Easter, anyway.

Are you giving anything up?

May we all have a holy and blessed Lent! 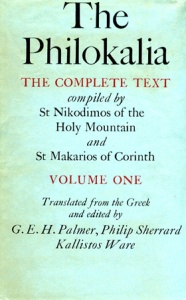 Thanks to those of you who voted in my Lent book poll. The results are in, and the winner is The Philokalia, Vol. 1, with 6 votes. Runner up is Living Wisely with the Church Fathers by Christopher A. Hall with 5 votes. Andrew Murray, With Christ in the School of Prayer only got one vote, which tells you something about the audience of this blog, I guess.

I am also interested in reading all three recommendations, each different in its own way:

Dietrich Bonhoeffer, The Cost of Discipleship

In 2018, setting aside what I read for work, I’m trying only to read books I own and not buy new ones, and I don’t own any of these or need them for work (although I could probably justify Boersma’s at some level), so, d.v., they’re on hold for 2019!

Let’s see what wisdom I meet in the rest of The Philokalia, vol. 1.

Which book do you think I should read this Lent?

The Cistercian World: Monastic Writings of the Twelfth Century by Pauline Matarasso
My rating: 5 of 5 stars

This was my Lent reading for 2016. It is the second Penguin Classic translated by Pauline Matarasso that I’ve read, the first having been her superb The Quest of the Holy Grail. This volume is an excellent anthology in readable English of selections from some of the most important figures in the twelfth-century Cistercian movement. It moves chronologically from the founding of the abbey at Cîteaux to the close of the century.

Matarasso gives a handy introduction to the origins of the Cistercians and their move away from some of the decadence of contemporary Benedictine abbeys, especially many associated with Cluny. Cistercians sought to return to the original letter and spirit of the Rule of St Benedict. Cistercian spirituality is a spirituality based on simplicity of life, dress, manners, art, architecture. It is based upon Scripture and the Fathers, and Cistercians sought through their patristic, scriptural simplicity, to attain union with God through contemplative prayer in the midst of the opus dei, the liturgy of hours. To further assist the reader in interpretation, each text has its own introduction, and there are endnotes.

Cistercians included in this volume are Stephen Harding, Bernard of Clairvaux, William of St Thierry, Guerric of Igny, Amedeus of Lausanne, Aelred of Rievaulx, Isaac of Stella, Gilbert of Hoyland, John of Ford, and Adam of Perseigne, as well as an anonymous description of the abbey and selections of exemplary stories about Bernard and other early Cistercians.

These men are aware of their own finitude in the face of the transcendent God. However, equipped with love, with the Scriptures, and with the power of prayer, they set out to clarify their knowledge of the divine and enter into God’s loving embrace, encountering the bridegroom of the human soul.

Some of St Bernard’s Sermons on the Song of Songs are included here, and they are mightily inspiring, reminding us of the different kinds of love and how we can fulfil the commands. Also inspiring for me were the Meditations of William of St Thierry, who demonstrates the heart of the contemplative. Aelred of Rievaulx’s On Spiritual Friendship is important for us to think over as we live in relationship with others—what sort of friendship is to be cultivated, and how to use friendship to attain spiritual heights.

This is the sort of book that makes you want to pray more and engage in ascetic endeavour. I am a most imperfect example of someone who fulfils that desire, however. Nonetheless, I have copied out some of the passages of the book for private meditation and hope to reread the whole anthology again someday in order to further deepen the grace God gives through his servants. Finally, I would urge anyone interested in the Christian mystical tradition to read this book and see what our forebears in the faith said, thought, and did, and also to be reminded (if you know of the eastern tradition) of the silent ecumenism that links mysticism across time and space and ecclesial boundaries.

View all my reviews