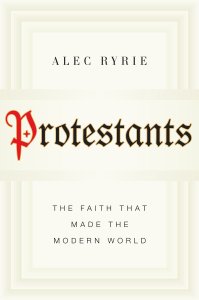 If you have put up with this blog long enough, you will have discovered that I go through times when I am uneasy about my Protestant identity but not convinced enough by the claims of the Orthodox to join them (let alone the Romish — I mean, Roman Catholics). Last week I finished off Alec Ryrie’s book Protestants, and it makes me uneasy once again.

First, though: I recommend this book. It is a look at the great love affair with God that Protestants have had over the last 500 years. Ryrie seeks to have sympathy for most of the weird, wonderful, beautiful, and bizarre characters and ideas that fill the page. The chapters on transatlantic slavery, Nazism, and apartheid are particularly powerful and uncomfortable because they show how Protestants were instrumental in the rise and fall of all three. On the subject of Nazis, he notes how few Germans resisted the regime and its ideology, and observes that if we had lived through what they had lived through, would we fare any better?

This sort of sympathy is not there to exonerate the guilty but rather to keep us off our high horses.

My favourite bits were about Luther, the English church from Henry VIII to the Methodists, and the chapter about Pentecostalism. Indeed, the Pentecostals were my favourite part of the twentieth century.

So what makes me uneasy?

As the book wound its way through the seventeenth century, I found myself being reminded of all the things I love and loathe about Protestantism. I tend to get fired up by the story of Martin Luther, whether played by Joseph Fiennes, or told from the perspective of print technology by Andrew Pettegree in Brand Luther, or wherever you meet the man. His story and his ideas make me love Protestantism. I also enjoy the English Reformation, of course.

But Protestantism is not so cut-and-dried. We may all have some family traits in common, and we may all cling to the words “justification by faith alone” (although we may also mean different things by them), but we are not all descendants of Luther. The ecclesiastical eruption that occurred because of him took many shapes even within his lifetime.

One of the by-products of the Protestant Reformation is the subjectiveness of the Christian faith now, coupled with the rise of individualism. For people like Luther to take a stand for conscience in the face of the machinery of sixteenth-century ecclesiastical power was heroic and maybe even necessary. But when combined with sola scriptura and the polysemous nature of textual meaning in the Bible, its results have been disastrous.

Who is Martin Luther to tell Zwingli that his interpretation of the Bible passages about the Eucharist is wrong? If it goes against Zwingli’s conscience to interpret Luther’s way and to celebrate Holy Communion in anything resembling the Roman Mass, who can stand in his way? And thus it goes, unsurprisingly producing not only Baptists and Methodists but Jehovah’s Witnesses and even Mormons as well.

We are an extraordinarily divided bunch of people, Protestants. Some say that the word is utterly meaningless these days.

Moreover, Protestants have had a harder time resisting the wider culture around us than our Orthodox and Catholic siblings. Sometimes, of course, Protestants were instrumental in shaping consensus — thus, after having had their wills bent to accept slavery, they would later be among the earliest, most prominent abolitionists. Yet behold the Nazis. Or consider the Anglophone mainline today and their stance on any ethical issue.

The hope that Ryrie does not express is that, as western society drifts farther away from Protestantism and secularism becomes more hostile to its roots in liberal Protestant religion, Protestants will find following western society less and less appealing.

Not that the Orthodox have never been seduced by secular cultural power. But in the West, because they are already the “other”, originating either as immigrants from Eastern Europe or indigenous Christians in the Arctic, they seem less prone to accepting western societal trends as norms for themselves. As an example, I read something by Frederica Mathewes-Green about the gay marriage debate and how she was slow to write on the subject because she felt American society had long ago already rejected traditional marriage from an Orthodox standpoint.

Anyway, what’s remarkable about our current Protestant moment is that even as statistics show that the more you give in to the wider culture the more likely you are to die as a church, much of the Anglican Church of Canada and United Church of Canada continue to pursue the path of accommodation that has been killing them.

And so do the evangelicals, they just don’t realise it yet — but Jesus of suburbia is a lie.

Anyway, I am about to read Archimandrite Sophrony’s book Saint Silouan. (I tend to alternate between East and West in my spiritual reading.) We’ll see where I stand when I’m done, right? For now —