Today is the Feast of the Epiphany. Normally we say, “This is when the Wise Men visited Jesus and brought him gifts of gold, frankincense, and myrrh.” And we’re not wrong in that.

But why is it called Epiphany?

Simply put — it is the revelation of YHWH to the Gentiles, represented by the Wise Men. It is the proclamation of the glorious God to the nations, found in the person of Jesus, the God Word Incarnate.

I’ve been mulling over lectionaries and Bible readings lately. One friend was encouraging people not to do a typical “Read the Bible in a year” plan but to use the daily lectionary from the Revised Common Lectionary because it puts the Scriptures together in Christological, Christocentric perspective. I have a built-in skepticism about the Revised Common Lectionary, so I started evaluating other options, looking for something pre-modern. After a lot of to-ing and fro-ing with my friend Andrew (a mediaeval manuscript guy who is a theologically conservative Anglo-Catholic pondering Eastern Orthodoxy [you can see why we get along]), I learned from him that the Canadian BCP 1962 lectionary for Morning and Evening Prayer is basically medieval.

Anyway, although this exchange also resulted in him sending me a 343-page Mass lectionary based on BCP-Sarum, I am going with BCP 1962, in large part because of the wonderful new Common Prayer Canada app from the Prayer Book Society! And its Scripture readings are doing just what my other, non-Anglican friend was lauding RCL for doing: Christological, Christocentric Scriptures.

Epiphany has been really exciting as a result — Psalms and Prophets proclaiming the recognition of YHWH by the nations, his revelation unto them, and Israel to be a light to lighten the Gentiles. You read this, and then you read …

not the three Wise Men.

This morning, the Second Lesson at Morning Prayer was the Baptism of Christ from Luke 3. And how does this end? “Thou art my beloved Son; in thee I am well pleased.” The revelation of Christ as God the Son!

The Eastern Churches use a different Greek word for today: Theophany. Today is the Holy Theophany of our Lord Jesus, and it explicitly includes the Baptism of Christ in the Jordan.

Some closing thoughts, then. First: Psalm 87 sees a day when Philistia and Tyre, Babylon and Ethiopia, will worship YHWH. Isaiah sees in multiple places the nations coming to worship the Lord, coming to his holy mountain. The nations, the gentes (hence gentiles), will see the glory of the Lord and recognise him. The wise men who met the child Jesus and bowed and worshipped him were the firstfruits of this crop. We are of the nations as well. What was prophesied in the Hebrew Scriptures is being fulfilled here and now as the glory of the Lord is made known to the ends of the earth because of the ongoing life of Christ, himself the Lord, in his mystical body, the church.

But the kingdom of God, the kingdom of the Heavens, revealed and made manifest in Christ at his holy Theophany — this kingdom will never fade. Let us hold to this hope and this citizenship above all.

Last night we had our second meeting about John Eldredge, Wild at Heart. We were discussing Chapter 2, which is about the wild heart of God, especially as it is manifested in Jesus. At one point, Eldredge says that all the images of Jesus we have around are limp and passive — at least, all the ones he’s seen in churches are.

And I thought, ‘Well, clearly he’s been to all the wrong churches.’

So I went through my postcard collection to bring a few non-limp Jesuses to show the other guys. These aren’t the exact postcards, but here are the images of Jesus I brought to study last night: 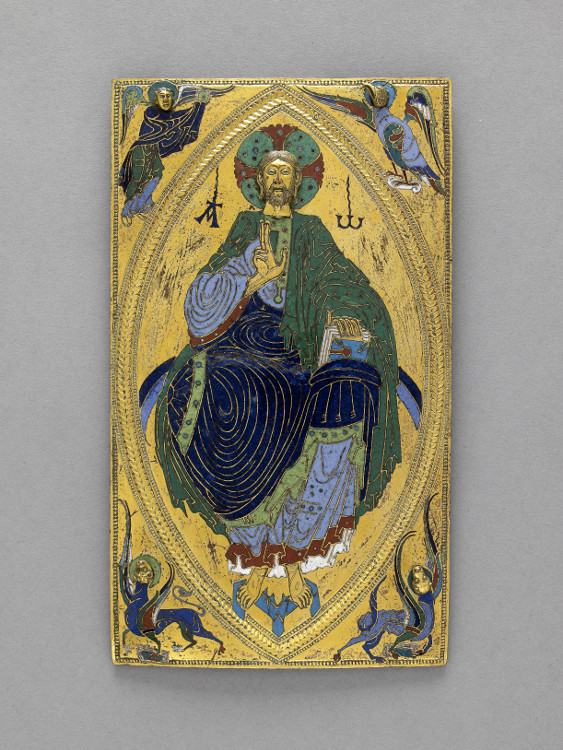 A twelfth-century piece of Limoges work of Christ in majesty now in the Musée de Cluny, Paris 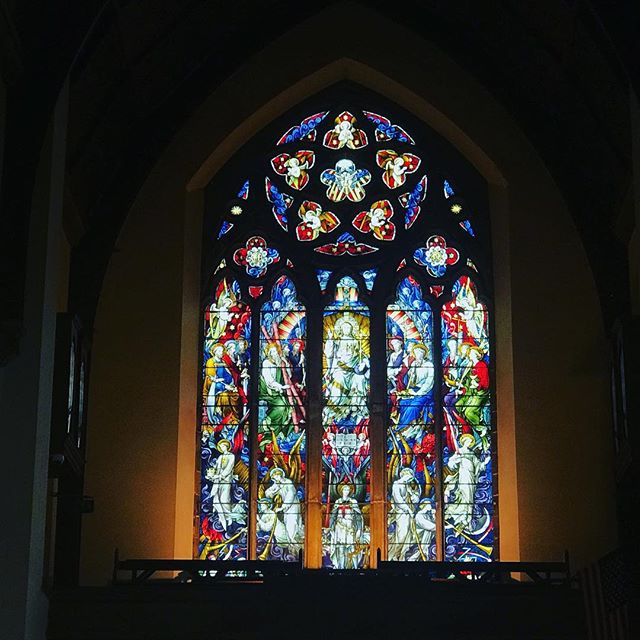 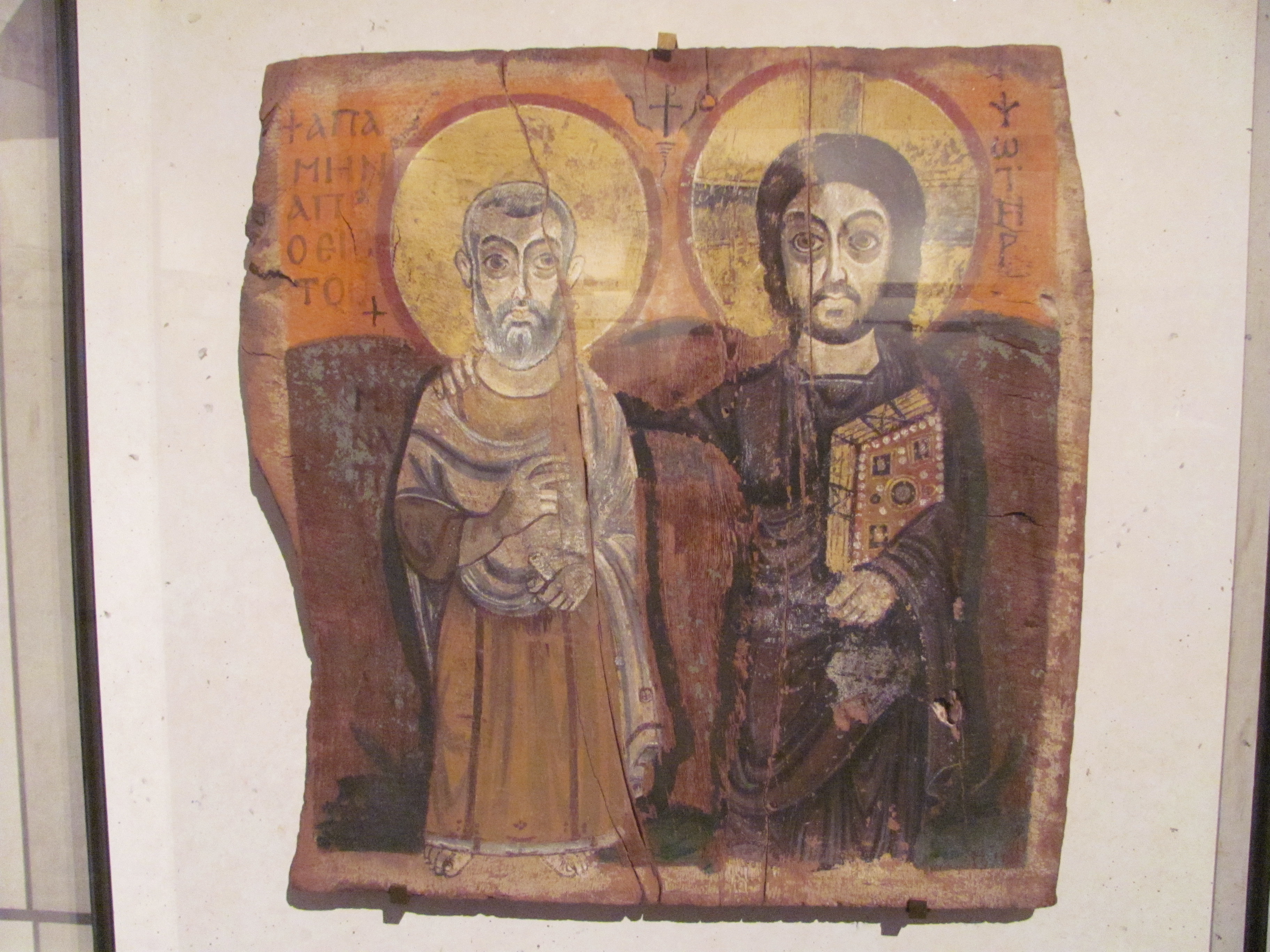 Jesus and Apa Mena, a sixth- or seventh-century Coptic icon now in the Louvre

The dome of Machairas Monastery, Cyprus

The Cross as Tree of Life from San Clemente, Rome

The apsidal mosaic of Santa Maria in Trastevere, Rome 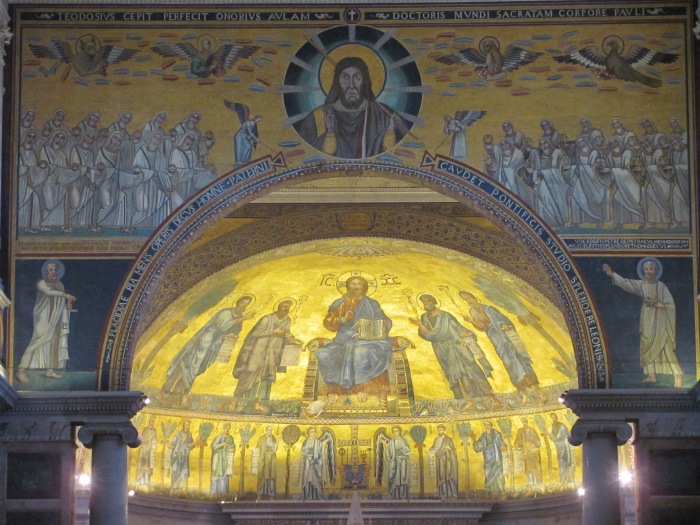 The images of Christ we see inevitably influence us and our faith, they affect how we view our Lord and Saviour. This is part of why the Reformed reject them — they can skew just as easily as uphold a right faith in Christ. And it must be admitted that Eldredge is not wrong about so much Protestant religious art.

One of the guys last night said that so much Protestant art is sappy and sentimental because it’s made for children, to illustrate a story or make the Bible accessible. It is not art for adults. He is probably right, which troubles me — my toddler likes Art of the Byzantine Era, Pauline Baynes’ illustrated Nicene Creed, and the occasional bookmark of the Sistine Chapel right alongside his Dr. Suess, Paw Patrol, and Beatrix Potter.

Why do we sell our children short and underestimate them?

What sort of messages about Jesus are we communicating to them and ourselves through this art?

against which Wild at Heart is reacting.

The art above, most of which is medieval (with one each of modern Catholic, Orthodox, and Anglican items), presents us mighty Jesus, King of Kings. He sits enthroned, passing judgement. He reigns as he dies, bringing life to the world. He can certainly be your Friend. And he blesses us from his majesty. Loves pours forth from his Sacred Heart.

Christ the King, throned in glory — this is the great theme of so many medieval mosaics and frescoes.

Yet he is the upside-down king, and here is why the Reformed are concerned about these images. Christ in glory — certainly true. But not wholly true.

One image I did not bring but wish I could have was the crucifix from Vercelli:

Christ is standing on the cross, in power. As King. Not hanging in weakness as in the later, Gothic crucifixes. At the moment of his greatest human weakness, at the point of his death, Jesus is at his most powerful. Some Byzantine crucifixion icons have the inscription, ‘Jesus of Nazareth, King of Glory,’ to emphasise the point.

Whatever our position on any of these images in particular or images of Christ in general, Eldredge has a good point — the carpenter of Nazareth Who refashions the crooked timber of humanity into something beautiful was neither limp nor passive.