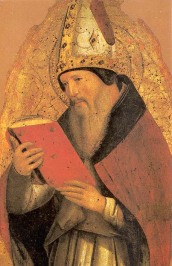 One of the more famous bits of St. Augustine of Hippo’s Confessions is the scene where he, as a youth, broke into someone’s orchard and stole a bunch of unripe pears which tasted terrible (the story is so popular there is even a Petra song about it). He and his buddies stole them entirely for the thrill of stealing, entirely for the excitement of sin. They didn’t even want to eat the pears; that wasn’t the point. St. Augustine, it seems, still felt bad about it years later. The story is as follows:

I wanted to commit my theft, and I did it compelled by neither want nor poverty but by a distaste of justice and a feast of iniquity. For I purloined that in which I abounded — and in much better! Nor did I wish to profit in this affair in which I was striving with theft, but only in the very theft and sin. There was a pear tree near our vineyard, weighed down with fruit alluring neither in appearance nor in flavour. To shake this tree and make off with its produce, we no-good youths made haste in the dark night when we had carried on our game in the streets according to our pestilential custom. And we carried off from there enormous loads of fruit not to to our meals but rather to cast before swine; even if we ate some, nevertheless it occurred that it was pleasing to us to do that which was not allowed.

Behold my heart, God! Behold my heart, which you pitied in the depths of the abyss. Now, behold, may my heart tell you what it sought there that I became evil freely and there was no cause of my evil except for evil. It was foul, and I loved it; I loved to be lost, I loved my rebellion — not that to which I was rebelling, but my rebellion itself did I love. My shameful soul was jumping from your firmament into destruction, not seeking anything with disgrace but disgrace itself. (Conf. 2.IV, my trans.)

St. Augustine spends the rest of Book 2, chh. V-X, going into depth about the anatomy of sin and the blackness of his own heart. You can read it all in Chadwick’s translation, pp. 28-34, or online here (Latin) and here (English). 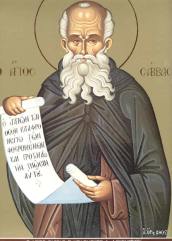 In my current research, I came across another story about a saint in an orchard. This was the tale of St. Sabas (439-532) and the apples as told by Cyril of Scythopolis (524-558) in the Life of Sabas, one of his seven Lives of the Monks of Palestine. At some point between the ages of eight and eighteen (probably earlier than later), when he was living in the Monastery of Flavianae in Cappadocia, the following occurred:

Once, when he was working in the monastery’s orchard, a certain desire came upon him to eat an apple that appeared ripe and exceedingly delightful before its regular season. Since he was burning with desire, he plucked the apple from the branch, but, when he had considered it, he prevailed against himself nobly.

So he rebuked himself with a pious reasoning, saying, “The fruit that put me to death through Adam was ripe for looking and good for eating, when he preferred that which appeared delightful to the eyes of the flesh over the intelligible beauty and considered the satiety of the belly more honourable than spiritual enjoyments. On account of this, death came into the world. And so I must not turn away from the beauty of self-control, weighed down with any spiritual drowsiness — for just as a blossom comes before all fruit-bearing, so self-control comes before the doing of good.”

Thus, when he had conquered the desire with this stronger reasoning, he threw the apple to the ground and trampled on it with his feet, trampling his desire along with the apple. From then on, he gave to himself such a rule not to experience the taste of apples until death. (Life of Sabas III, my trans.)

Following his encounter with the apple in the orchard, St. Sabas devoted his life to ascetic labour so as to produce virtue. He went on to found the Great Lavra, a monastic settlement in Palestine.

The difference between these stories about youths encountering fruit trees is striking. One is a tale of woe and sin, of seeking disgrace for disgrace’s sake. The other is a tale of victory and virtue, overcoming the flesh with the spirit. One imagines that young Augustine was more fun than young Sabas — only he seems sort of … neurotic at times, all messed up over those pears. But the real difference is not in the facts themselves but in the genre of writing we find here.

Augustine’s Confessions is among our earliest autobiographical bits of literature (other early autobiography comes from the pen of St. Gregory of Nazianzus and his poetry). This work is written as one long prayer to God, confessing both in terms of the sinful state of Augustine’s soul as well as, after conversion, the power of God and Augustine’s belief in God. Thus, it binds together in a single narrative two types of confession. It is psychological and theological, seeking to show the reality of sin within the depths of the abyss of the human heart as well as the power of God to raise us out of sin and into the virtuous life of the righteous.

The Confessions edifies through telling us what God can do for sinners like us. That is its devotional purpose. Each of us may have wicked inclinations, but God can transform us through His Spirit, through good preaching, good friends, good books, Holy Scripture, and the prayers of our mothers.

Cyril’s Life of Sabas is a different creature. It is hagiography, and as such hovers between the borders of history and myth. At one level, the purpose of hagiography is write down the stories of holy men and women so that these stories will not be lost. Good deeds must perish unless they are sung of (I forget the reference for that quote). That is the same purpose as history as well as of heroic poetry. At another level, these particular stories are written down in their particular order to demonstrate what holiness looks like. The point is not necessarily to show us psychologically real person who is simul justus et peccator (to toss a bit of Luther in). Rather, the point is to show us what a holy life looks like.

We may say to ourselves that holiness is unattainable. Or ridiculous. Why give up apples? But, two chapters after he gives up apples, we see young Sabas walking into a giant bread-oven whilst it was lit and not getting harmed. Holiness is not just ascetic labour but also the accompanying miracles and virtues. The holy men of old gave up the world, gave up their parents, gave up their inheritances, gave up apples (of all things!) to draw closer to God and meet Him where He is.

The point of hagiography is to edify us through these holy examples. We are to stand in awe of the God who can take an Augustine — such as we all are, with our dark hearts full of wickedness, seeking disgrace for the thrill of it — and make him into a Sabas — such as we all hope to be, conformed into the image of Christ. Our worship of God is thus lifted higher and exalted — the whole purpose of theological enquiry, by the way.

And we are encouraged, for it is God who makes the saints holy. Thus we can become holy ourselves. He will effect this change in ourselves. This is the point of hagiography, even if St. Sabas may never have walked through the fires unscathed (even though he may have, if you believe in a God for Whom nothing is impossible).

Thus, both genres are useful. We live in an age when things like the Confessions are more in vogue. We like to know that even good men, great men, have been there, too. Indeed, many people like to humanise our Lord Christ by making him imperfect yet still sinless (else how could he be fully human? — they say). We may find obsessing about our mothers’ teats and our desire to suckle as infants as selfishness a bit neurotic, but overall the Confessions are enduring literature that speak to a need in our souls.

I think hagiography is as well. Hopefully we’ll start to read more of it.